Adobe Character Animator is a software by Adobe Inc. that captures a character’s image and animate it in real time. The animated character copies everything you do including simple movements such as smiling and nodding your head. The software has several great tools and features that make all this possible.

Adobe Character Animator can capture your emotions and replicate them to your animation character. If you face expresses sadness or happiness the character will look sad or happy respectively. You can even import arts from other software such as Adobe Illustrator or Adobe Photoshop and turn them into characters. The software allows you to animate even other parts of the body such as arms and legs movement. You only need to save a certain movement such as waving on a keyboard’s buttons and use them at will.

Adobe Character Animator is available for Windows OS and Mac OS in purchase for full features access. You can get the most suitable package that suits you best.

Looking for Adobe Character Animator free download links? In this article, you will learn about the legal ways to get the program in 2021.

I will also tell you about several free alternatives to Adobe Character Animator that will help you work with animation like Adobe software. Besides, you will learn about the risks of downloading pirated or crack software and what problems you may face if you do so. 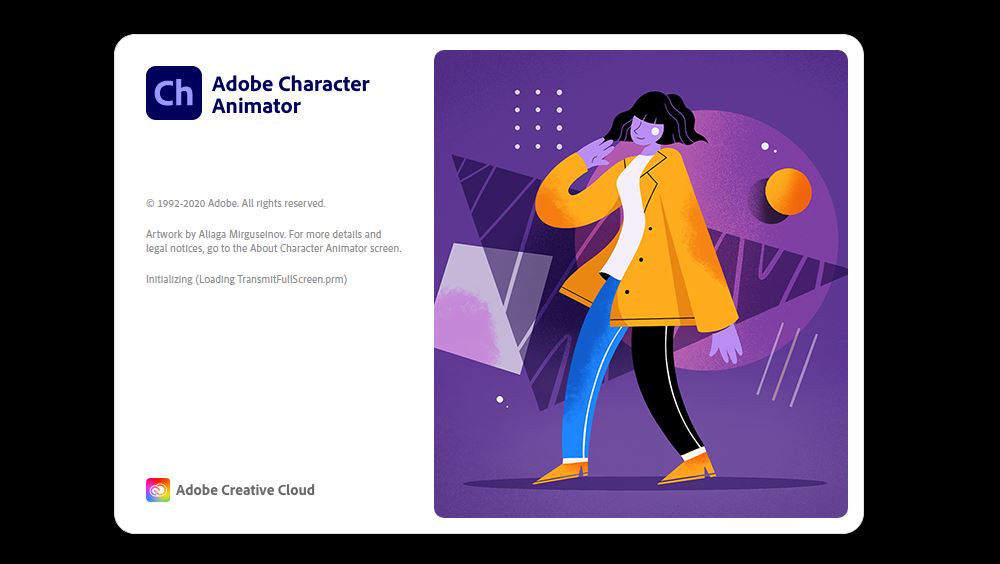 People, who are looking for Adobe Character Animator download links can be engaged in different professional spheres but they are all interested in creating a character that can be further “made alive”. Some of them also opt for this option when they need an analog to entry-level free stop motion software.

The program is feature-rich, but all the instruments are intuitive-to-use, so even beginner animators, educators, gamers, video content creators, graphic designers and illustrators won’t face difficulties mastering it.

You can test the features of Character Animator if you download After Effects Free Version or Creative Cloud from the CC apps catalog. You need to sign in, indicating your Adobe ID and password to get access to the trial version.

Unlike the best 3D animation software, Character Animator isn’t very demanding when it comes to system requirements. You need to have a Multi-core Intel processor with 64-bit support, 8GB of RAM, and the latest OS version.

The last update introduced a lot of functions. The most notable among them are Provide Feedback button connect with the product team and fellow Character Animator users; Markers in a Character Animator scene are now displayed in other applications (e.g. After Effects) using Dynamic Link; possibility to control the volume of each audio track independently in a scene’s timeline.

Another Ways to Use Adobe Character Animator Free

Character Animator is part of the Creative Cloud Suite. Therefore, you are guaranteed to get it if you subscribe or use the Trial Free Version.

Downloading Adobe Creative Cloud Free Trial, you get a really huge number of programs for creative work. From a one-stop online storage and collaboration features to entire collections of necessary things for working with images, animation and video such as Adobe Portfolio, Adobe Stock, Adobe Fonts, etc.

Considering all these features and the tendency of the company to keep improving its products, this subscription plan is really worth considering.

Software piracy is the theft of intellectual property. Therefore, everybody using not only Adobe programs, but any other photo animation software, should opt for only legal and licensed products in order to avoid privacy breaches, data loss or even a system crash. 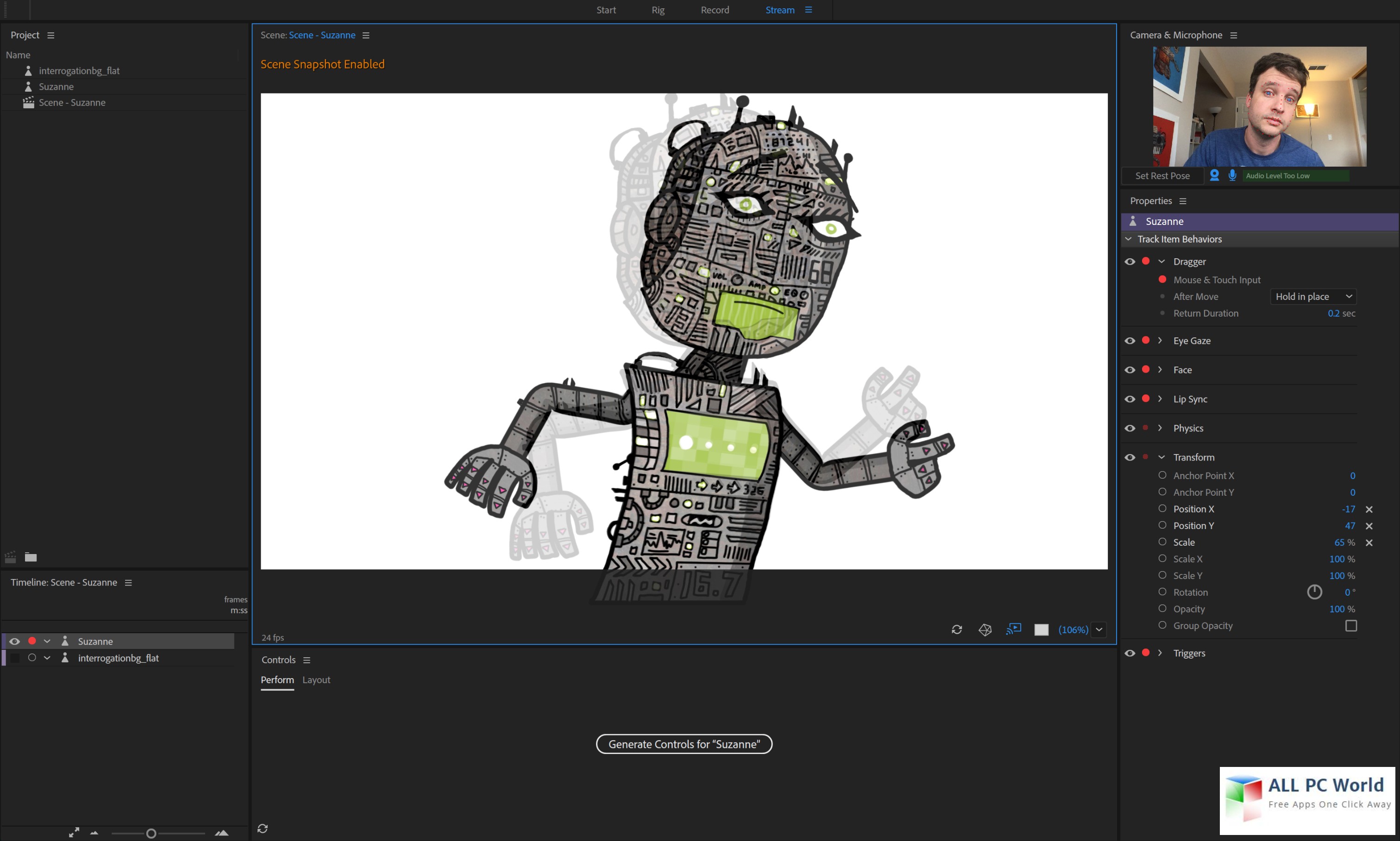 1. You Break the Law

Everyone on the lookout for Character Animator free download versions should be well-aware of the problems such copies bring. If you are officially found guilty for such an offense against the law, you will either have to pay a fine reaching $250,000 or/and spend 5 years in jail.

Most pirated motion graphics software come with unpleasant bonuses in the form of various viruses. Nowadays, these malicious components can really spoil your work by damaging the OS.

If you feel happy because you’ve managed to find Adobe Character Animator free download with crack and now can save some money, you may be very disappointed after a while. The thing is that such programs are shared without any manuals, so if you have never used them before, you’ll need to spend quite lots of time to understand how each tool works.

Besides, if something goes wrong, there is no guy from the tech support whom you can address. Another reason to look in the direction of official programs only is that they are regularly updated, which isn’t true for hacked software.

Instead of trying to find an illegal way to download Adobe Character Animator for free, it's better to use alternative free animation software that sometimes have an even wider range of features and tools.

This program is a wonderful Adobe Character Animator alternative because it can satisfy both beginner users and more experienced animating specialists.

There are 3 methods of producing a character. You can start working from scratch and make a custom 2D character, look through a large database and choose a suitable variant there, or import PSD character templates. To make the character look alive, the software offers various motion templates grouped in the library. You can find even 3D motions there.

Depending on the software version you have downloaded, you can find lots of cool features that allow making your character look awesome.

For example, the latest edition has such praiseworthy functions as audio lip-sync, facial detection, and Bone Rigging tool. All in all, this is a great replacement for Adobe Character Animator crack, which gives you complete control over the process of producing a character and other complicated animations.

Moho (Anime Studio) is similar to Character Animator but it sticks to a simplified approach to creating animations, which makes it perfect for beginner users and even kids. Anyway, the variety of offered instruments is on par with more advanced software aimed at pro-level illustrators and designers.

The UI is very straightforward, posing no difficulties while mastering this program. After testing this version, you can switch to a Pro one.

However, mind that it can be too expensive for some users. Anyway, it is supplied with a plethora of state-of-the-art tools which are well worth every cent you spend on the software.

This is a great program for animation with a rich toolset that can appeal both to rookie and professional animators. In fact, regardless of the idea you have in mind, chances are high that you will be able to find all the necessary tools here to bring it to life.

Use the free Adobe Character Animator download link to get a legal and quality 2D animation program. You don't have to worry about your experience as the program is suitable for both beginners and professionals.